The final part. Under a cut of course...

In case you missed them: Part One, Part Two

I'll skip the quotations here because pretty much anything I would say would just sound really corny. Its the end of senior year, with all of its various exciting moments. And here are the pictures to prove that I lived it, and I loved it.

Lots of pictures, even though this is only the last two months, because there were lots of events. I tried not to repeat many of the pics from the prom picspam, however, so I wouldn't bore you too much. Enjoy!

The three Science Olympiad captains, at the Academic Awards Night in early May.

On to prom, which was beyond amazing. If you're interested and you missed it, my prom picspam is right here. But I thought I would throw in a few new pictures (and some cute repeats) to show you a little more (and a little less of the traditional) of prom.

Another picture of Jeremy and me, that didn't make it into the first picspam.

My dad actually snuck in some cute pictures of my friends, including this one of Hayley, being her amusing self.

And this one of Hayley and Jim being adorable...

Speaking of adorable, I had to include this one of Caitlin and Phil again, because she never lets me take pictures of her.

Then on to Commemoration, the night before Graduation...

Julie, Hayley, Me, Alaina, and Emily

Now its time to graduate...

Dr. Yannacone, the greatest principal ever.

That's me walking down the stairs with my shiny new diploma...

The traditional shot with my parents

The class flag, with Hayley and Caitlin who sewed it, and Kevin, who designed it. Yeah, its freakin' awesome.

Phil, Caitlin, Hayley, and Me in front of the flag 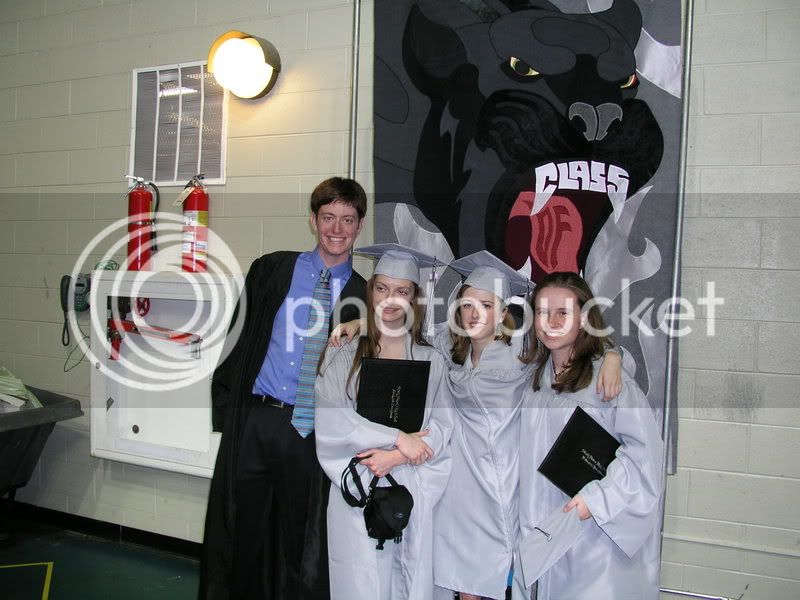 Me and Alex in front of the flag

And finally, with Mrs. Shapiro, forever my hero

What do we do after graduation? Well, we eat cake. (Notice the SHHS and NU colors)

And then, off to Senior Celebration, the boat cruise on the Spirit of Philadelphia

Ari, Christine, Caroline, and Me

Caroline, some sort of mix of a gangsta and a teddy bear

And one final shot, to exemplify high school.

Well, that's all folks. For real this time. If you looked at all three parts, you just looked at 51 pictures. I hoped you enjoyed it, it was fun to make.

Oh, and comments are love.